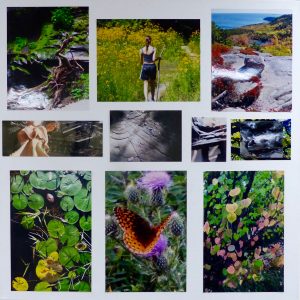 The three canvases with photos and the finger labyrinth are presented as a gift to the Prince of Peace congregation from Nancy Herrington and to further initiate a connection with the labyrinth project. The drawings of labyrinths on the canvases are demonstrating how to draw a labyrinth from the beginning seed pattern to a seven and 11 circuit labyrinth. Each photograph is chosen because of the analogous or symbolic reference to labyrinths such as: the spiral, a sacred place, mirror reflections, and the walking/ spiritual path. There is  a journal  available on the labyrinth display table at POP so all may participate with our creative endeavor. 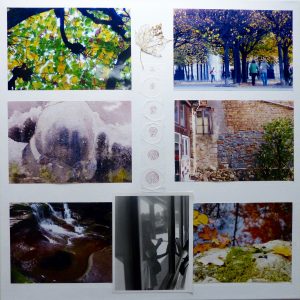 Who knows what will be possible for you as you travel its’ pathway?
May you encounter blessings.
Who knows what you will connect.
May blessings occur.
Who knows what transformation and illumination may occur.
May your movements and insights be blessed.
–Helen Curry- 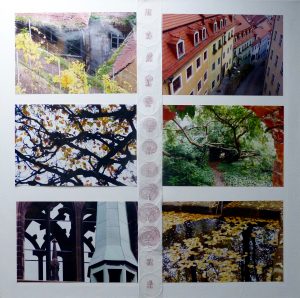 We can value each step we take and each step can bring us happiness because we’re in touch with life, with the source of happiness and with our beloved planet. Bells of mindfulness for each other, supporting and reminding each other along the path of practice. With the support of the community, we can cultivate peace and joy in ourselves, which we can then offer to those around us.  Body, speech and mind in perfect oneness.
-Thich Nhat Nanh- 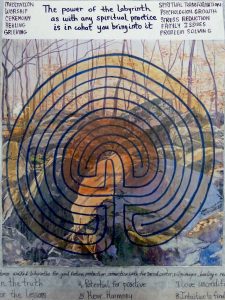 Before you enter the labyrinth, take a couple deep breaths and release them slowly. Know that the path has no wrong turns or dead ends but is a continuous path that will guide you on your journey. Let go of everything except the present moment in time. Walk at a comfortable pace and just be at one with all that is around you. Be prepared for a sense of joy, love and peace to surround you. There is no wrong way to walk the path.
– Denny Dyke-

The following notes are taken from five books and are shared to assist in finding symbolism and inspiration for producing a performance art piece for the labyrinth at Prince of Peace Church.

The Once and Future Goddess- Elinor Gadon

The universal meaning of the Labyrinth form is a symbol for the journey into the other world and the return, a death to one state and rebirth into another. Only one path- in and out.

For the Hopi Indians- the Labyrinth was a symbol of mother earth. A kiva was an underground sanctuary where Hopi people emerged into world.

The Return of the Divine Sophia- Healing the Earth Through the Lost Wisdom Teachings of Jesus, Isis, and Mary Magdalene-Tricia McCannon

The death of the ego allows a powerful shift in consciousness that then propels us toward a greater awakening. The Vairagi (detachment) teach that the 3 purest aspects of God are Love, Sound and Light.
In the beginning was the Word- Gospel of John
Sound current- Aum, Shabda, Vani, Nada Music of the Spheres
The “Aum” is the cosmic vibration- and underlying that creates and sustains all.
Sound particles (phonons)- become light particles (photons) Joined together by gluons- the wave form of sound- transitions into the wave form of light.
Ancients saw the sun as a visible symbol of God- transmitter of heat, warmth and illumination.
The spiral of creation, Fibonacci spiral and golden mean section.
The fish symbol originally meant the union with the divine. male and female in harmony.
The vesia piccis- two overlapping perfect circles- the balance of male/female allows creation. The v symbol with circle inside represented the female organs of procreation- resembled the shape of a cow’s head and horns. The cow was sacred to the Goddess- a symbol of the moon and rebirth in Egypt and Crete.
In Egypt- the Goddess Ma’at- represented the motivational forces and rhythm- accuracy, honesty, fairness, faithfulness, authenticity, legitimacy, integrity and justice.
A flock of butterflies represents transformation and change.
A circle with a cross at the center is a symbol for the soul- a medicine wheel- union of balance and healer of wounds (body/ emotions/ mind/ spirit).
A sacred circle begins in the east- travel sun wise or clockwise. East is the gate of new beginnings, rising sun and illumination.
The snake coil/ biting tail- represents life/ death/ transformation.
The three phase of a person’s life- Female-maid, mother, matriarch and Male- youth, man sage.

The Meander or Greek Key- if the symbol is rotated outwards it becomes a labyrinth. Found in old Europe 5000-6000 yrs. before Greeks.

The Chartres Cathedral- built on a pagan site, located in the nave, under the circular stained glass window above the door to the cathedral. Window is the same size as labyrinth and same distance from floor to glass as door to labyrinth down the nave. The labyrinth is 40 feet across, an eleven circuit, four quarters, seven- 180 degree turns with seven paths and 272 tiles (same amount of average days in human gestation) . Chartres labyrinth completed around 1225 A.D.
Victorian drawings show monks of the Middle Ages crawling the labyrinth’s path on knees. Medieval, full size labyrinths can be found in Gothic cathedrals. Many cathedral labyrinths were removed or covered.
The four quarters of a labyrinth- four had a great significance to the medieval mind.
Luke-bull-Taurus-earth
John-eagle-Scorpio-water
Mark-lion-Leo- fire
Mathew-young man- Aquarius- air

THE SEVEN CIRCUIT LABYRINTH: 22 FEET ACROSS
A PROBLEM SOLVING DEVICE- THE CHAKRAS
root- physical- state the problem or opportunity (red)
sacral- emotional-feeling (orange)
solar-mental-how will it affect me (yellow)
heart- personal spiritual- call for help
throat-manifestation- intuition-open up (blue)
brow- vision- solution to fruition (purple)
crown-God or Goddess- evaluation and (violet)
Breathe then turn back and reverse the process

The Native American Medicine Wheel-12 sections- The Cycles of Truth
Learn –the truth
Honor –the lessons/ knowledge of experience
Accept – the lesson/ responsibility/ changes coming
See –potential for positive or good from experience
Hear –harmony
Faith –trust your faith
Love –unconditionally love ourselves/others
Serve –intuition to find what we need
Will – to live in truth
Work –produce creatively
Walk- in truth and attract positive energy/ release negative
Thank- give thanks for healing and becoming whole
Unite our gifts with those who love us.

In archaic art- labyrinth is represented by spiral. The labyrinth mirrors itself –if hold drawing of labyrinth in light, you see the back will reflect the opposite direction. There is a shifting back and forth, light and dark, negative and positive.

Myths- The hero, Goddess, ruler of the underworld, shadow and messenger are associated with labyrinths. The Minoan labyrinth in Knossos of Crete had a minotaur in the center. The myth tells of king Minos of Knossos who asks for, and receives, a white bull from Poseidon to use as a sacrifice to the Gods. Minos decides to keep the bull and Poseidon angrily curses queen Pasiphae of Minos to be sexually attracted to the bull. The consummation of the bull and Queen results in the birth of the Minotaur. The Greek architect Daedalus constructs a labyrinth to hold captive the unmanageable and deadly beast, which was half bull and half man, (Minos and Taurus). Theseus, born of the King Aegeus of Athens and Aethra from Troizen, travels to Crete and slays the Minotaur. The myth changes over the years from a labyrinth to more of an impenetrable maze that was underground.

Sacred spaces- tunnels are associated with them
The Minotaur- ruled by animal nature- Theseus must defeat the self conscience- the shadow
The Centaur- human nature rules
The Crane Dance- from the island of Delos- Dancing into the Labyrinth in a chain often described as the feeling of being born.

The Way of the Labyrinth- Helen Curry

Labyrinths are all unicursal “a single course or path” with no dead ends. Labyrinths are described by the number of circuits they have- for the number of rings that comprise a labyrinth, not including the center. The circular path of the classical labyrinth is part of a tradition of symbols that involve circular movement as in sacred circle dances from around the world. Archetypal symbolic circles represent wholeness, unity and the divine center around the globe and in prehistory to present. The word labrys (from the Mediterranean region) means “double axe” and is believed to be the root of labyrinth.

Locations of Labyrinths
Labyrinths were widely adapted by the Romans ( mosaic pavement examples) and transported from Britain to Eastern Europe to North Africa. Turf labyrinths, ridges with shallow trenches and a mound in center, are found throughout Europe. The classical 7 circuit labyrinths were often called “Troy Towns” or “Walls of Troy” which also meant “city of turnings” in Wales.
In Scandinavia, more than 500 stone labyrinths, mostly near the coastline, have been recorded and similar labyrinths were found in Russia, Iceland and the Baltic. Ancient cultures walked the labyrinth for good fortune, protection, connection with the sacred center, pilgrimages and healing. Labyrinths were painted on church walls in Scandinavia. Some ancient labyrinths in Sweden were located high up in mountains and hills associated with ancient graveyards.
Discoveries of labyrinths were found in India and in A.D. 1000 China, labyrinths were constructed out of incense for keeping time in ceremonial rituals. Labyrinth themes, in China, include motifs of meanders, caves, spiral towers, shells and pearls in Taoist texts represent life, death and resurrection.
There were “power animal” labyrinths constructed around A.D. 500 in Peru where it is believed they were used as a ritual for empowerment. Many of the animal labyrinths were meant to be walked on the line, not the path (mirror patterns). Where the entrance was, usually was the source of “fertility, reproduction, and continuation of the species”. Tribes in southern Arizona wove baskets with labyrinth imagery composed of dried leaves, stems and roots of desert plants.
The Hopi saw the labyrinth as two forms, one circular (the Mother and Child) and one square (the Sun Father), as a representation of new life. The circular shape represents the female womb and the child cradled in its mother’s arms after birth. The square shape was representing the seed and giver of eternal life.

A Pathway to connect to the sacred within
The power of the labyrinth as with any spiritual practice, is in what you bring into it. Focus attention inward to be simply and fully present.
Conscious intention, some degree of mindfulness is required. Don’t have expectations or judgments. Consider a meditation or mantra to create a mental sacred space.
Spiritual transformation, worship, ceremony, psychological growth, stress reduction, healing, grieving, family issues, problem solving, mindfulness, team building, leadership development, change can be the goal for the journey to the center.

Who knows what will be possible for you as you travel it’s pathway? May you encounter blessings. Who knows what you will connect? May blessings abound. Who knows what transformation and illumination may occur? May your movements be blessed. Let us pray before the awesomeness of such a mystery.

How to Relax- The Art of Mindful Living – Thich Nhat Nanh

We can value each step we take and each step can bring us happiness because we’re in touch with life, with the source of happiness and with our beloved planet.
Bells of mindfulness for each other, supporting and reminding each other along the path of practice. With the support of the community, we can cultivate peace and joy in ourselves, which we can then offer to those around us.
Happiness and awareness, smiling, calming. Few desires- content with a simple life for desirelessness is the basis of true happiness. Peace, joy and ease- true happiness- your true home.
Let go of anger, jealousy, sadness. Never blame- understand- you can love the situation- will change. Body, speech and mind in perfect oneness.